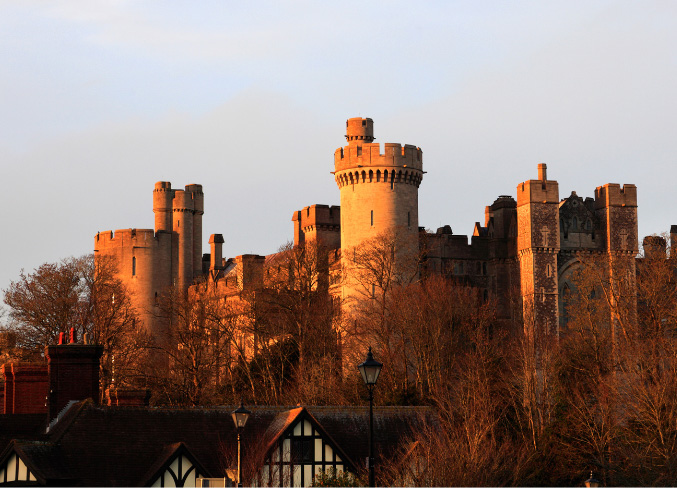 Planning on visiting the quaint village of Arundel in Sussex? We’ve put together our top recommended landmarks and a bit of their history:

Arundel Castle is a true masterpiece.

Originally built in 1068 by Roger de Montogomery, the Earle of Arundel, the Castle has been restored over the years to maintain its position as one of the most iconic buildings on the South Coast and one of the most well-kept castles in the country.

The castle sits on 40 acres of land, consisting of the castle itself and the stunning castle gardens, both of which can be accessed on a tour (usually open between March and October). On a castle tour, you are able to wander inside and explore The Keep, the Fitzalan Chapel and the Castle Rooms, all with their own splendour. The castle gardens plant an extraordinary annual tulip display, the largest tulip display in Britain with some 60,000 tulips along with many other spring flowers which are in full bloom from March onwards.

What is fascinating, is that unlike many historical landmarks, the castle is actually lived in by the current Duke of Norfolk and his family. Many of the internal rooms are fully functional and viewable to the public for half of the year. A tour will give you the opportunity to view inside the dining room, ballroom, library, bedrooms, and even see the bedroom specially commissioned to be built for the use of Queen Victoria’s visit to Arundel Castle back in 1846!

Outside of the castle walls is the quaint and charming village of Arundel. Picturesque from the moment you drive over the bridge and into the village, it is impossible for Arundel to disappoint. There is not a chain in sight, and instead a multitude of restaurants, cafes, boutique stores and antique shops await.

Enjoy a spot of afternoon tea amongst a day of antiquing or an early evening pint in one of the local village pubs followed by a spectacular meal in one of Arundel’s excellent restaurants (or both!). The food and drink scene in Arundel is outstanding and is one of the many reasons the locals are so fond of this charming village.

Further up the hill from the village centre, you will come across Arundel Cathedral. Originally built in 1869 by the 15th Duke of Norfolk, the Cathedral has been a focal point for Arundel ever since. The Cathedral has regular services and concerts and is host to a number of events in Arundel throughout the calendar year. The Cathedral is open daily to the public from 9am – 6pm so pop in and have a look around this majestic building.

Arundel attracts visitors year-round not only due to its historical landmarks, but also its festivals.

Every year during the summer months, Arundel hosts the Arundel festival, one of the largest multi-art festivals in the South with entertainment ranging from music to art to theatre.

Year-round, on the third Saturday of each month, there is a local farmers’ market hosted in the village centre with vendors selling a wide array of high-quality local produce for visitors and locals to enjoy.

Need a place to stay in Arundel? View our list of holiday rentals in Arundel today.